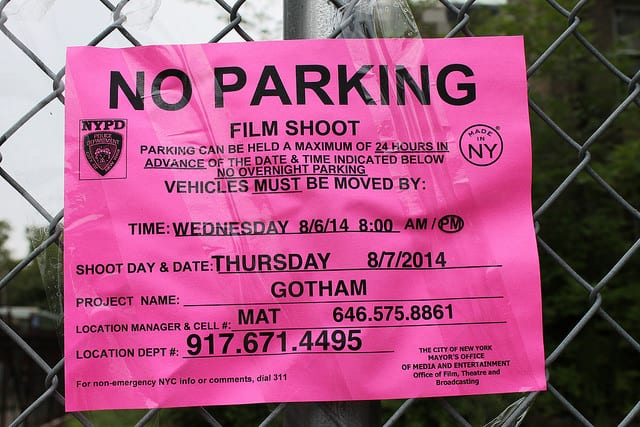 NYC is experiencing a filming boom. According to The Brooklyner, 2016-2017 had a record breaking 56 TV shows film in NYC. While all these shows filming here has many economic benefits, it also has some downsides. One major downside is parking. Film crews can move into neighborhoods with only 24 hours notice and take an astounding number of parking spaces!

So what happens if you don’t see the signs and your car is left in an area blocked off for filming? Well, they will tow your car, but fret not! They’ll simply move it to the closest available parking space outside of the filming zone. All you have to do is call your local precinct or 311 and they will help you locate your car.

Also if the number of spots they are taking seems excessive, get in touch with your local community board or reach out directly to the Mayor’s Office of Media and Entertainment. There have been reports of film crews putting up no parking signs that they weren’t even sanctioned by the city!

Of course, if you park in one of these no parking spots after they go into effect, you could end up with a parking ticket. And that’s where Ticket Wiper comes in to help. Just download the app below and scan for your ticket in the NYC Database. Then we will fight the ticket for you, and if we win, you only pay 50% of the ticket. Otherwise you don’t pay a dime. Try it out today!